What Can Spokane Homeowners Expect from Professional Flood Damage Recovery? 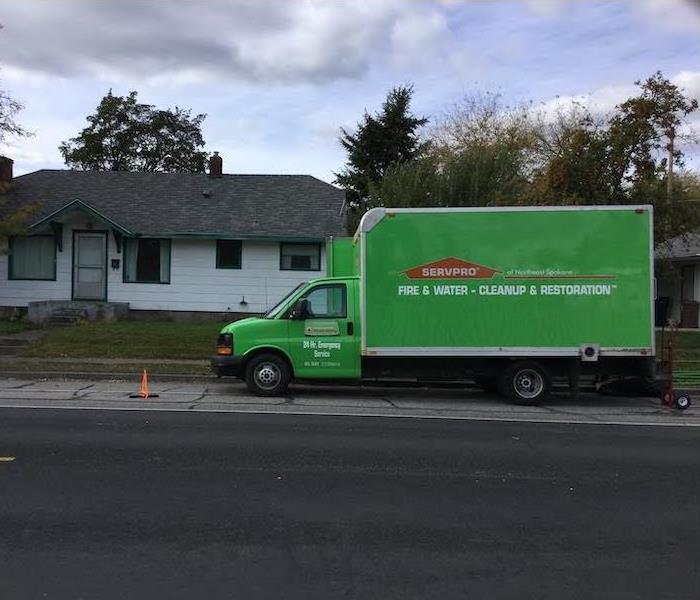 Flood damage is no laughing matter. Call the professionals at SERVPRO to have your property restored to preloss condition.

The Spokane area has many stories of relatively recent flooding in the Vinegar Flats and Peaceful Valley areas. Seasonal overflows from Handman Creek and the Spokane River frequently put homes built in these locations at risk of substantial flooding. A devastating flood occurred on May 15, 1957, when mud, rocks, and debris flowed nearly as freely as the water pouring over the rivers' banks. Houses clogged with silt were also surrounded with several feet of larger rocks and mud. Modern flood damage restoration efforts surely would have been appreciated during the 1957 disaster.

Has the Spokane Area Always Been at Risk of Flooding?

No matter how severe flooding gets in the 21st century, the stories pale compared to the massive Missoula floods dating to the end of the Last Glacial Maximum. Research into this ancient flooding began in the 1920s. Geologist J Harlen Bretz was the first to investigate the deposits and unique erosion patterns in eastern Washington. The miles-deep ice sheets ultimately covering what is now Washington State began their buildup 33,000 years ago. Maximum land coverage with glaciers peaked between 26,500 years and 19,000 years in the past. Climate changes caused the glaciers to disappear over a period from roughly 15,000 to 13,000 years ago. In the Spokane area, the melting of the glaciers resulted in the prehistoric flooding, known variously as the:

Where Did the Missoula or Spokane Floods Flow?

The flooding affected what is now eastern Washington State, unloading massive quantities of glacial meltwater down the Columbia River Gorge. There is evidence that the narrows adjacent to modern-day Kalama Washington halted the flow enough that temporary lakes more than 400 feet deep formed, spreading floodwaters in the Willamette Valley to what is now Eugene, Oregon. Sediments deposited during those events likely contributed to the fertility of the soil in the valley.

Was There One or Many Ancient Floods in the Spokane Area?

Many researchers developed hypotheses, often divergent, about the Missoula or Spokane floods' number and timing. Eventually, a consensus developed after years of controversy. Analysis of sediments and the use of paleomagnetism theories lead to the best answer possible at this time. Paleomagnetism comprises the study of the Earth's magnetic fields as presented in rocks and sediments, and sometimes fossils. The investigations determine:

What Is the Most Recent Theory on the Mechanisms of the Prehistoric Flooding?

Using the above resources separate discernable layers into convincing evidence of sequential floods. The glacial meltwater dammed up for lengthy periods and then released many times. Proof of the repeated flooding events reflects in the following:

Note: Experts currently believe there were 30–40 year intervals between flood events based on the above data. On occasion, the gap in flooding could have been up to 60 years.

Why Did the Water Release from the Glacial-Era Natural Dams?

The Clark Fork River drains a vast region of the Rocky Mountains, including western Montana and northern Idaho areas. This watershed created prehistoric "Lake Missoula" above the Columbia River gorge. Ice dammed up the glacial meltwater, holding it tight until a sequence of natural reactions periodically "burst" the dam, and substantial amounts of water flooded down the outflow of the watershed. With every inch of water collected behind the dam, pressure increased at the bottom of the dam. The pressure lowered the water's freezing point, permitting liquid water to invade cracks in the ice dam. As more water invaded, the fissures increased in number and size. Shortly thereafter, the dam collapsed, followed by a glacial lake outburst flood. Once the overflow was released, the dam was built back, and the cycle recurred.

Estimates of the size and speed of the flow when the dam burst is staggering:

What Is the Protocol for Flood Recovery in Spokane Today?

Current Spokane's storm-related flood damage is more manageable than the ancient flooding, particularly when our Institute of Inspection, Cleaning and Restoration Certification (IICRC)-trained team arrived with fully-stocked service vehicles. Prompt assessment of safety hazards, plus structural and content damage is crucial, and our 24-hour response sets the stage for a successful resolution of a flood loss.

How Are Flood Waters Removed and Spaces Dried in Spokane?

SERVPRO maintains a comprehensive and scalable inventory of high-efficiency water pumping and extraction equipment. Once silt is mucked out, we select from the following options:

What Do Professionals Do to Clean and Disinfect After Spokane Flood Damage?

Surfaces receive thorough scrubbing with EPA-registered cleaners as a first step to remove pathogens and limit odors. SERVPRO crews wear personal protective equipment (PPE) for safety and to prevent the spread of residues and debris during flood cleanup. Persistent smells might require advanced deodorization technology such as enzyme treatments or hydroxyl generators to change the chemical composition of odor-bearing particles.

Although we are spared the devastation of Missoula floods in the 21st century, SERVPRO of Northeast Spokane takes your flood damage needs seriously. Call (509) 474-9144 any day of the year, round the clock, for top-notch flooding mitigation and remediation services.